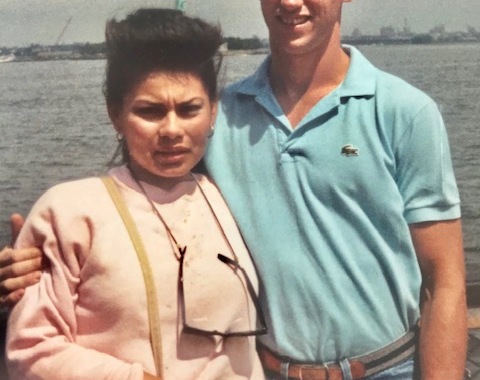 I’m going to tell you about my New England connection, si pues, this Mexican-American has a few stories and an array of emotions as I discovered Bens gringo world. Nowadays it’s nothing new to find one of mi gente on the East Coast, but back in the mid 80s when I started the brown Mrs. Greene journey I really felt all alone.

So I’ll have to go back to the time before the fireworks display of our engagement.

Having been in San Diego Ca. only a year and a half, the melting pot of cultures intimidated me. My upbringing, with the unspoken but obvious boundaries made me shun gringos. White guys didn’t notice me, I certainly wasn’t going to notice them. Period.

You can imagine the incredible turmoil and betrayal I experienced when I noticed my Benjamin! A White guy from New England!? Not even a tanned Californian! Of course I rejected the idea for a season and moved on… and went back…and moved on…but eventually the fireworks burst out the wonderful colorful display of our young love and promise. A hopeful new beginning like God’s promise through the rainbow, a much needed display that sealed the deal.

Benjamin Walter Greene and I were married in a “Jesus People wedding”. I looked around for a definition of our kind of ceremony and couldn’t find one, so instead of google defining or describing our wedding I will. Our wedding ceremony centered around Jesus instead of the bride. Right in the middle of our Sunday morning worship service the bride comes in. No grand procession of walking the aisle. Doesn’t that sound just right for me? If you’ve read some of my other posts you’ll note that I’m a simple girl. A simple wedding was just my stilo but for some brides, or mother of the brides, it’s a huge deal! Hijole!

We heard the good news of the Gospel, pledged our hearts and lives to our marriage covenant with a resounding I do. We broke bread with our families, sweet and simple, the honeymoon awaited us. Then, we stepped into the twilight zone of our mixed marriage, well mostly I travelled by myself because for some reason Ben was not tripping!

Our First Year of Marriage

It was a first year full of fireworks, mourning and hormones, asi es, explosive! My ama had just passed in May, I learned I was pregnant in June and we were scheduled to fly out to the East Coast in July. My life was already upside down and I was going clear across the country to the other coast, Pacific to Atlantic! A whole new world.

Ben was excited! He couldn’t wait to show me his childhood home and life. As the weeks drew closer he showed me again pictures of his family home in Connecticut, a house his architect father had designed. However, for the Greene/Torrey Family, the real treasure is the family estate home, which is called the Manse. Yes, the houses have names! Manse means the residence of a minister.

Ben told this little desert girl with barely any roots in America that his family traced back ancestors to England and the Mayflower! Que hiba pensar? So many levels of OMGs!

I accused Ben calling him an Aristocrat! A cold blooded Englishman! My son Emery would say white privilege! Rico! Y yo? No wonder mi apa was very nervous about us marrying. Of course, this is what was causing my nausea. Ben needed to go alone on his voyage to see his family.

Everything I had feared was gonna happen to me now! How could Ben make me go? How could Ben leave me all alone? How could Ben even think of going at all? Wasn’t he supposed to leave his family and cleave to me, his wife? I didn’t think I could survive being surrounded by only English speaking people, who would I turn to?

July came and we boarded our flight to New York City. If I was gonna go so far away I had to have someone familiar so we visited friends in NYC. I thought the Big Apple was for the rich and famous or for the peliculas, no movie, it was the real deal. This Mexican American played tourist in the big city, even if it was only a few days. We visited the Statue of Liberty, The Twin Towers and experienced New York pizza. We wanted to walk the streets of Spanish Harlem but didn’t feel confident enough, I guess my small town barrio experience wasn’t gonna cut it. The New York Ricans were the spanish speakers, sort of. I barely understood them and they said I spoke spanish like I was singing! Three days passed like the whirlwind and before we knew it  we were on a train for  Connecticut. Que aventura verdad? I didn’t realize that the adventure was going to slow down to a complete stop. Life in my husbands world was calm, very calm. It made my heart race, crazy huh?

Just getting out of the city quieted everything down, except for my thoughts. Bens mom met us at the train station, a quiet reunion and ride home. I was the only one who felt awkward, I’m glad I was in the backseat because I would have been awkwardly fishing for conversation topics. Right here is a good place to tell you that apart from coming from different worlds, Ben and I are complete opposites. I’m a talker, I’m noisy, I’m busy, I’m loud…he’s not. Wow! It was going to be a silent two weeks.

New England is beautiful. Man! I’m terrible about these types of details, I hope I can hang on to your attention here. Greenery, tall trees, lakes. Aver, see if this helps you see how I saw things. We drove down the narrow roads with tall trees on each side and looking far into the distance you almost felt like the trees were going to close you into a tunnel. Bien bonito, like in the movies. compare that to the dry desert view of the Imperial Valley

In the big city, with all the pollution and noise the mosquitoes didn’t bother me, but as soon as I stepped out of Nancys car, they welcomed my fresh blood. Ben says it’s that spicy latina blood that I bring from the West.

The Architect and the Artist

Ben’s dad had designed the house in an H shape. Muy interesante. The tall pillars of the H were the main rooms and bedrooms. The horizontal pillar of the H had the bathrooms and laundry room. I haven’t lost you have I? One of the openings of the H was where the front door was, while the back deck covered the other opening of the H. The deck had been built with a tree planted in center for shade, eventually. It was quite serene, until my eye caught a little gargoyle propped over the roof’s edge. Although it was an artistic touch, it bothered me. Maybe el cucuy‘ was supposed to keep Ben and his brothers in check?

Right in the front yard was an old rusty tractor as decor. Where I’m from esos tractores were child’s play for us. Pero, on the East Coast antiques are a big deal. The house stood tall and serene in its natural wood. The living room and dining room had large wall size windows that overlooked a large field and pond.  It was truly a Good Housekeeping magazine scene. My mother in law was a multi talented artist and her home displayed her artistic hand.

This was all so new to me, I felt like I was in a museum and Ben was enjoying giving me a tour of his house. Things that were commonplace to him, were amazing to me. Like a windy staircase, como los ricos, that went down to the basement. Basement? Only in some of the books I read.

More large windows. Imaginate, in the bathroom! They could easily be peeked into from the dining room with it’s wall size windows. How in the world was I going to shower? Thankfully, my husband shared the secret for a comfortable shower time. Run your hot water, steam the windows then you could relax. I’m a bit indecisive on where I should include the fact that the bathroom door slid into the wall, they didn’t really secure shut. Pero Pues, I got through my first few days in New England without too much verguenza, thankfully, everytime I showered the windows stayed completely steamed and covered.

I’ll have to do a part two post on my first New England experience since I haven’t even described my Manse experience, you know the Greene/Torrey Estate house in New Hampshire? Es que, there’s so much reaction in this first visit. So many things we take for granted, like chile!  A meal without chile, Asi es! No chile whatsoever, not even tabasco sauce. Hijole! All you salsa and chile addicts are feeling me right now huh? This was only the beginning to my cultural shocks in the kitchen that I would experience.

My experiences would be considered “A first world problem” but as silly as it was, I had a lot of adjusting to do, I think it might be called assimilating? Chale! Nope, I would have to make some Mexican American contributions to my new family.

Next time I’ll take you to the Manse in Jaffrey, New Hampshire.

I would love to hear about your culture shocks or adjustments as you encountered other countries or cultures, even here in America.