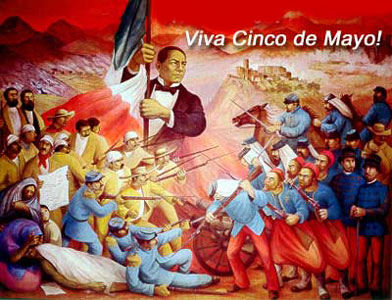 A Cause to Celebrate

In general los Mexicanos, y los Mexican Americans  are always down for  a good fiesta. We can lay out a beautiful scene and cook a delicious spread! Verdad? Con mi familia, we usually celebrated the main events like weddings, quinces, baptismals and Navidad and yes Accion de Gracias, can’t leave out Thanksgiving! After that, other federal or famous days went unnoticed with my familia, my apa  worked Monday- Saturday and sometimes on Sunday, all that to say that Cinco de Mayo did not stir up a fiesta around our house. Que si es un poco extraño, strange, because my apa loved to talk about the Mexican history, especially the Revolucion. You know, the Cinco de Mayo story is a great one and I think it should be a national holiday in Mexico, pero no lo es!

Do you know why it’s such a happy occasion for us, the Americanos? Pues, I do now. Con mucha pena, as embarrassing as it is, I confess that I just barely uncovered a few of the details. Pero, con mucho gusto I pass along my few history findings on Cinco de Mayo in this short and sweet history lesson.

The Battle of Puebla that affected us

The Battle of Puebla is observed primarily in one city of Mexico called…. Puebla, where the pleito took place. Here in the United States, communities with large Mexican American populations celebrate with an almost Grito zest. However, it is not about Mexico’s independence, but rather, Mexico’s perseverance. The United States was indirectly affected because of Mexico’s small triumph.

After it’s long and difficult fight for independence, Mexico struggled so much that it became financially bankrupt. Mexico’s presidente, Benito Juarez found a solution by stopping payments going out to their foriegn debtors, que facil verdad?  Nope! It wasn’t that easy, the Europeans wanted their dinero.  Three powers met to see how they would deal with those Mexicanos! Spain, the U K and France devised a plan to invade Mexico. They sent an intimidating military presence to bully the Mexicans into paying their debts. France led the campaign since it had greater aspirations through this attack. Napoleon III was looking to establish a stronghold in North America through Mexico! Esperate! it gets more intense. As soon as the other countries saw his grand scheme, se arrepintieron!

Napoleon Connects with the Southern States

Although Napoleon was now on his own, he was confident that he could easily take care of Mexico and accomplish a French stronghold. But listen, this was only part of the bronca, he had visions to dominate in North America!

Napoleon had a close connection with our Southern States. He was aiding the Confederacy during the Civil War! Yes,  asi fue, Napoleon supplied them with weapons in exchange for cotton which France’s economy heavily relied on. Imaginate! Napoleon was busy trying to conquer the world while Abraham Lincoln was trying to bring about Emancipation and reuniting the divided nation.

The Battle in Puebla aids the Civil War Cause

Yendo al grano. The bottom line is that the battle in Puebla was a classic underdog victory story. My apa loved these kinds of stories! The French were a superior military force, while the Mexicans with their humble state of enlisted and volunteer army had more will and perseverance than might. The French went in confident and well armed,  the battle raged  from sunup to sundown, but neither General Zaragoza nor his men would back down. When the French General realized that more of his men were going down in the battle, he had no choice but to retreat, Victory!  As I write this historic event I can picture my apa telling me  accounts of the Revolucion de Mexico, his eyes always glistened proud when talked about Mexico’s battle for independence. He was an underdog advocate, he strongly believed that one must confront that bully no matter what!  He backed conviction up referring to his own victory against the Bully in his life.

The victory in Puebla gave Mexico a surge of confidence as it forged on. Napoleon was stopped in his tracks for a moment. He was prevented from helping the Confederacy with relief supplies and weapons while the Union army was able to regroup and gain strength. Meanwhile, en El Norte, established Mexican Americans citizens that lived in free states were relieved for the reprieve because it would indirectly aid in the Civil war cause. The Union could march forward with its vision for Emancipation.

Sin duda! A good old fashion David vs Goliath victory. It was a cause for celebration. Those early fiestas included honorable mention of  General Ignacio Zaragosa who stood his ground and faced that bully!

The story may have been forgotten but the fiesta goes on

Through the years the battle in Puebla or it’s historic significance has gotten buried, but in Mexican American communities, Cinco de Mayo is a continual celebration of Mexican culture. Traditions such as Mariachis, Ballet Folklorico and delicious Mexican food are celebrated around our states.

However you layout your menu for the day’s festivities make sure to include plenty of salsa and guacamole for all the unavoidable tortilla chips. After that, feasts range from tacos, chalupas, enchiladas and somewhere you’ll see some carne asada on the grill. Of course we cannot enter or leave a Cinco de Mayo feast without having a tamal, verdad? Y acuerdense  “Si se Puede”